Season 2 of Degrassi: Next Class premiered on Netflix just a few weeks ago. In honor of my love for the iconic hit Canadian series, I decided to reach out to some of the cast. The first cast member is Chelsea Clark. She plays the lovely and confident yet manipulative Esme Song. Check out our little chat. 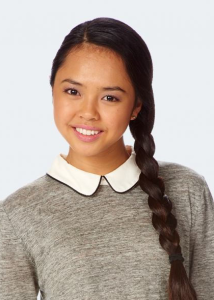 So you just finished up high school this year and that included the big prom. How was prom?

Prom was super great! It was a nice intimate venue and everyone really got together and looked great as our one last hurrah.

Esme was such a negative influence on Miles but a really interesting character. What should we expect from Esme moving forward?

We can expect to see sides of her that are really different than the first two seasons. Her interactions with the other characters will be most interesting.

Question from Twitter user @DegrassiFeels: If you could write an episode about your character, what would you make your character do?

I would want to write a scene of her interacting with her family or no family we don’t know! Also crazy stunts would be AWESOME (Scuba diving, bungee jumping, the whole shebang.

If you could swap places with any of the characters that attend Degrassi, who would you swap with?

I’d swap with any of the Hollingsworth family members. They’re great characters AND get a pool!

If you could have a super power what would it be?

What’s one of your biggest/weirdest fears?

What would be a good theme song for your life?

Degrassi: Next Class is streaming on Netflix or check your local listings. You can also catch previous installments from Degrassi’s 30+ year history through various media. It will be worth your investment.

Yesterday was all about Aislinn Paul and Ana Goljia. All good things must come to an end. Today marks the end of my Degrassi interviews just in time for the spring finale tonight. I bring to you an interview from another new entrant to Degrassi this season. His character is currently feuding with Zig Novak over Maya Matlin’s heart. Will he win? This is the question that only Eric Osborne knows the answer to.

Jr: What are the similarities and differences between you and your character Miles?

Jr: How do you think Miles stays afloat when it comes to the situation regarding his father’s affair, and his recent relationship struggle?

Eric: On the subject of the affair that Miles’ father is having with Andrea, Miles is very conflicted. He is very hurt and disappointed to find out what his father is capable of and he definitely shows it. But he knows he needs to be strong for his siblings and to prove to himself that he is strong enough to persevere. Miles is trying to be mature in order to protect his family and prove to himself that he can be mature.

Jr: There is this love triangle or battle of sorts that involves Miles, Maya, and Zig. Can Miles and Zig co-exist in Maya’s world at the same time?

Eric: I believe that for Maya, she would love to believe in the possibility of having both Miles and Zig. She feels responsible for both of them and cares for both of them. However, Miles and Zig would never be satisfied with “sharing” Maya, and in their minds, whoever ends up with her is the victor. For Miles, it is just as much about getting Maya as it is about defeating Zig. Therefore, it is impossible for Zig and Miles to co-exist and share Maya.