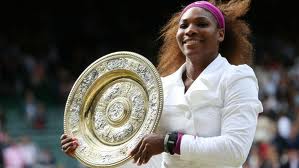 That’s right. Serena Williams has won the fourteenth major of her career by defeating Agnieszka Radwanska from Poland in the singles title. Just hours later her and Venus won the doubles title. Today symbolized the greatness of the William sisters. Serena battled it out in a tough three sets against Radwanska. Neither of the Williams sisters showed any signs of being bothered by the lack of them not competing together on the same team for over two years, Venus’s early exit in the singles competitions, or Serena’s championship match just hours earlier. Venus and Serena showed everyone why they are two of the all-time greatest female tennis players. Together they have thirteen Grand Slam doubles titles. Up next for both are the Olympics where they hope to obtain a gold medal and the U.S. Open soon thereafter.