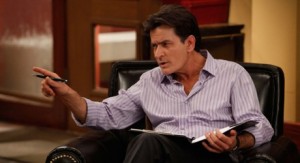 Apparently Charlie Sheen happens to still draw millions of viewers even away from his days at Two and a Half Men. Sheen’s new sitcom “Anger Management” debuted as the highest rated premiere in FX history. The first episode that aired garnered 5.5 million viewers while the second episode drew 5.7 million viewers. Charlie Sheen’s new show is loosely based off the 2003 film of the same name which starred Jack Nicholson and Adam Sandler. If he and the show continues to draw these type of ratings, then expect this show to last quite a few seasons.

Congratulations to British singing superstar Adele as she is expecting her first child with boyfriend Simon Konecki. Adele announced the big news today on her website during a period where everyone was surprised by the Tom Cruise divorce news.

After being together for a little over seven years and being married for five, Tom Cruise and Katie Holmes are getting a divorce. You never want to see a marriage fail especially when children are involved. The couple’s daughter Suri will be thrusted into a major custody battle.