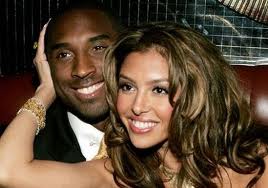 In a week when university started back up for me plus setting up some interviews, I wanted to touch up on a few things good and unfortunate that has happened this week. I use this picture of Kobe and Vanessa Bryant as a way to simulate that despite the smiles, nothing last forever.

The AFC and NFC Championship games are tomorrow. The New England Patriots host the Baltimore Ravens in the first game followed by the San Francisco 49ers hosting the New York Giants.

Etta James R.I.P. The legendary singer passed away from complications of leukemia less than a week from her would be 74th birthday. My thoughts and prayers are with her family.

Sarah Burke R.I.P. Sarah died from the complications of a skiing accident. My condolences are with her family and friends. She was only 29 years old.

Vanessa Bryant will net 75 million and three mansions as part of the divorce settlement from NBA superstar, Kobe Bryant.

It seems as if no one will last as Seal and Heidi Klum are reported to be divorcing soon after six years of marriage. The couple has three children together. I hope they work things out.