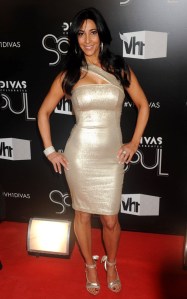 You know her from one of Vh1’s hit reality t.v. shows “MobWives”. That’s right, I recently had the chance to talk to Carla Facciolo about her battles with Renee, not going through with her alleged divorce, and what she hopes for the new year. When the question arose about Carla not going through with the divorce, she talked about all of the unnecessary work they would have to go through just to show that she and Joseph weren’t ‘together” again. Carla also talked about how difficult it was to communicate with Joseph about the situation while he was behind bars due to time limits and constraints.

Did you do anything for the holidays?

“Nothing special, same for holidays, when the family comes over. Fish night for Christmas Eve. Nothing different.”

What do you say to those who say that you are violating the mafia code by doing a reality t.v. show?

“I think they’re crazy because I do not speak of anything really with the mafia. Everybody on the show speaks about what goes on in their life.  I speak about my life.”

Was there anything about season 1 of Mob Wives that made you think twice about doing a reality t.v. show?

“I have my little group of friends who know my business. I’m pretty quiet.”  Im not one to go and put my business out all over. No one didn’t know too much about me. That made think “I don’t know if I should do this”.

I’m glad you did this, haha I really enjoy the show.

“It’s really a reality show because these things are really happening.  These are things that go on in our lives. When husbands go away and you are left home being a single mother, this is what really happens.”

Was is it about Renee that gets under your skin?

“That mouth of hers” She thinks that if she screams louder that makes her tougher. I just don’t like to constantly scream and yelling.”

“Originally I come from Brooklyn. I’ve known Big Ang for years. Big Ang is from Brooklyn. Ramona I did not know before the show. Big Ang has a big heart. She is a realy nice person.  She doesn’t like all of the drama. The other one is sort of like a troublemaker. You’ll see on the show.”

Now that the family is back together, is everything good?

“He’s home now but we’re still not a family. We’ll go see a movie together with the kids but we’re not together like that, like husband and wife and wife again.”

How do your kids feel about being on screen?

“Sometimes they don’t want to film. You know what they do like?  They like to see themselves on tv once in awhile.”

Why do you think men watch the show?

“Men watch the show, especially men who have been through this with their wives. I think the show hits them at home.”

Will season 2 show more of the business side of these women or will it just be all drama?

“Well, I mean I can not deal with the drama. When women gets together there is always something. There are a lot of business adventures. Everything with Renee is drama drama drama.. There is something always going on around Renee.”

Do you ever come into contact with people who watch the show, including haters of the show?

“People that I meet loved the show. I haven’t came into contact with any people who hate the show.”

Do you think that your show depicts a more realistic lifestyle as opposed to other shows, such as the Housewives series?

“I think my show is definitely the realest reality show. I feel like our show is real because these are real things going on in our lives. People think that we make things up.”

What do you have to say to your fans who have seen your squabbles with Renee and wonder what is really going on between you?

“If you hung out with Renee, you’re going to see what kind of girl she is. I’ve known her for a long time. I like Renee but she can get under your skin. She can push you to a point where you can explode.”

“I was thinking about that. It’s all about making sure that my kids are happy in life. To do something to make something out of my life and to get away from all that catty drama.”