Being that this is the blog where all forms of entertainment meet as one, I wanted to share my thoughts about two athletes and video game related news. First and foremost, you have one of professional basketball’s superstars from the Oklahoma City Thunder in Russell Westbrook. Although OKC missed out on making the NBA Playoffs this year mainly due to injuries, Russell Westbrook was big time. He is a superstar and for that he was rewarded as cover boy of NBA Live 16. The upcoming basketball game from EA Sports will try to dethrone the NBA 2k series and reclaim a crown that once belong to them. Despite missing fifteen games this past NBA season, Westbrook posted career high per game numbers in points, assists, rebounds, and steals. So while NBA 2k16 will have three different cover athletes in Steph Curry, James Harden, and Anthony Davis, NBA Live will have just one. I’m more of a fan of just having one cover athlete but four top notch athletes will be rewarded this year. I want to know if the necessary improvements are going to be made in NBA Live 16 to make it worthy for me to buy it. The graphics are looking better but I do need to see more of what this installment has to offer. Can Ea Sports create a great basketball game again?

In other news, Marshawn Lynch of the Seattle Seahawks has done some motion capture work and will be included in Call of Duty: Black Ops III. The game is due later this year and will feature him in a villainous role. I am interested in seeing how this will play out. This is something that has not been done before. To take an athlete and use them in this capacity is sure to peak the curiosity of “Beast Mode” fans who may only play as his likeness in the Madden video game franchise. This is not only interesting but congratulatory as well for Marshawn. He has taken so much flack for his interactions or lack thereof with the media, so to see him get this honor to be in one of the most successful video game series ever is truly a good distinction. Both video game franchises are trying to push the envelope. Only time will tell to see if either game is a must buy. 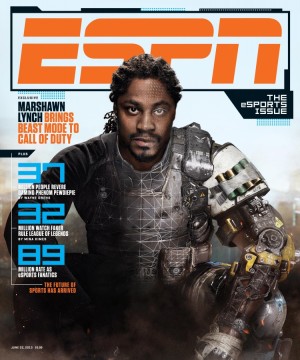