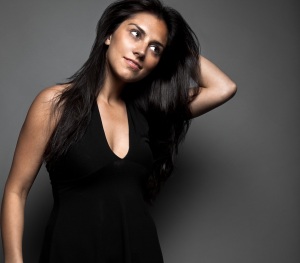 Can you tell our readers a little about yourself?

I am a first generation born Italian from New York. I started acting/comedy at 8 years old by making fun of my dad and all his Italian buddies. Ever since then I never stopped making fun of people, I mean acting. Through acting in New York I fell into the voiceover world and started doing promo’s, commercials and eventually cartoons.  I moved out to LA in 2010 to be the voice of Disney Junior and here I am. People that inspire me are Larry David, Ricky Gervais, Woody Allen, Tina Fey, and Lucille Ball, just to name a few. To me being inspired is as important as a good meal and breathing.

What gave you the inspiration for your you tube show?

The main inspiration for “The Maurizio Show” can only be no one other than my father Maurizio himself. A lot of inspiration also came from growing up with crazy musician parents who always had passion and drive for what they did. Friends would come over and see my mother practicing her drums next to a Cuban man draped in traditional afro-cuban garb and my father running between making sauce and playing scales on the piano. They were confused…so I made them laugh to distract them.

When did you decide that you wanted to create a funny web series?

I have to give a lot of credit to my manager Dan Cotoia who saw the possibilities in me. He kept pushing me to write and really gave me the fire and opportunity to create this series. He then teamed me up with one of his production company associates at Media Meld Studios, Brian Bellinkoff.  Brian is a very talented young writer/director/editor and shooter. Yeah he does all of that. I pitched the idea for the show to the both of them and we were on our way. This show would have never happened if it weren’t for those 2 and Media Meld. We are a great team and all of the same vision, creativity, and sense of humor.

What goes into the development of your web series? How often do you brainstorm for an episode?

Our process of creating each episode is really simple actually. We come up with a general premise of each episode and then write a beginning, middle, and end. After that, I just improvise and hope that something magical happens. Since we shoot a lot in public, there are many variables that can either make or break the episode. We haven’t experienced the breaking yet. Brian is an amazing director/shooter/editor which also makes this process so fun and easy. We are really just having fun and hoping for the best. Also hoping to not get arrested!

When people see you in person do they know you as Maurizio or just as Melanie?

When people see me they recognize me as Melanie. This I am extremely thankful for because if I don’t have a mustache on and a man wig and people still think I look like a small man, then I have bigger problems to worry about.

Describe the Maurizio series, why people should pay attention to it, and future plans?

The Maurizio Show is based on my real emigrated Italian father. It is a semi-scripted comedy web series that chronicles the larger than life antics of Maurizio. Utilizing hidden cameras in public places, Maurizio is out to prove to anyone that he knows everything about everything. People should definitely check out the show if they enjoy true unexpected comedy. They should also check it out to be the first ones to say they knew about Maurizio before he was super famous and on the Wendy Williams show! The Maurzio Show is planning on a season two with some celebrity guest appearances and an introduction to some new characters.  I’d love to team Maurizio up with one of his favorite celebs also, like Queen Latifah or Phil Collins!

What do you hope to accomplish in 2012, both personally/professionally and with the series?

We hope to find a real home for The Maurizio Show in 2012. Whether that be having a great comedy site buy it, or Comedy Central. Kind of the same thing right? Ha.  I personally wish for the show to become globally popular where people of all ages will know and love it. The ultimate goal to be able to make the whole world laugh.